I would like to run my MNT Reform notebook without SD card. In the manual I also how to switch to NVMe.

After I created a partition with gnome-disks and formatted everything ext4, i run the following commands as root user:

The SD card is still necessary for booting, but then everything runs from the much faster NVMe SSD.

I read on Twitter that it is also possible to use the eMMC storage from the CPU module instead of the SD card as a boot medium.

Can someone please explain me how to boot without SD card. I have already found the jumper labeled BOOTCFG

Thanks a lot
Nils

Hi, I’m happy to hear the migration process worked just like that!

If you want to go SD-less, you have to switch over to the eMMC. For this, you need to switch the little DIP switch on the i.MX8M SOM. This is a bit tricky because you need to remove the heatsink to reach the switch. Putting the heatsink back on with the little plastic spacers requires a bit of patience. But yeah, all you need to do is flip the switch, boot without the SD card (you will end up in the Rescue System). There, do reform-boot-config nvme once again.

OK… I have found the switch. (It is not the switch labeled BOOTCFG.) Set the switch to OFF and put everything back together. 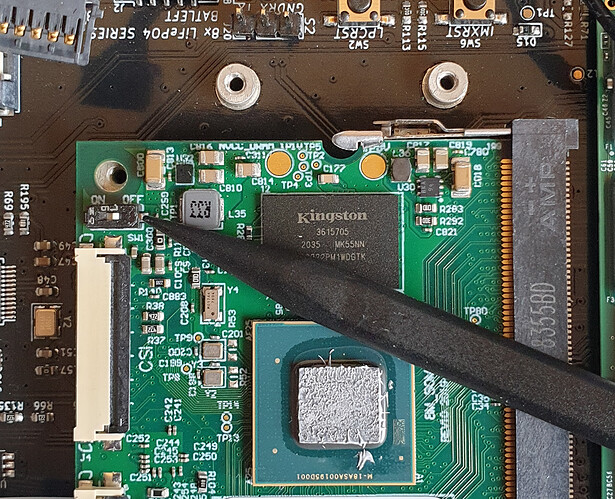 No problem with the heatsink. I am now in rescue mode. But the script reform-boot-config does not work. It always wants to mount and write the SD card. The SD card (/dev/mmcblk1p1) does not exists. The eMMC is /dev/mmcblk0p1.

But after a reboot it boots the rescue system again.

Do you (or anyone else) have another tip?

Hi, the Rescue System’s u-boot (on eMMC, /dev/mmcblk0boot0) does not use /sbin/reform-init, that’s why it does not respect /reform-boot-medium.

To work around this, flash this alternative build of u-boot onto the eMMC boot partition: A variant that uses /sbin/reform-init in the eMMC boot sequence, allowing to boot from NVMe via eMMC · Reform / reform-boundary-uboot · GitLab

Super. With the new u-boot version it works. I did everything as you described:

Thanks you two. This worked for me as well.
To summarize my approach:

Thanks very much guys, system is working and I’m typing from my reform

For anyone having issues when running reform-boot-config nvme when in the rescue system without an SD card inserted:

I had to run reform-boot-config --emmc nvme.

This worked perfectly for me! I wasn’t able to get it to work with some of the previous instructions, but this did the trick for whatever reason. Thanks!

Another way of doing this if you’re having issues is to manually edit the file /reform-boot-medium on the emmc, and put the desired boot medium in there, be it “sd” “nvme” or “usb” (without quotes

I get my MNT Reform on Monday–can’t wait!

One question, if someone can clarify:

If I invoke this command above before trying to flash the u-boot to emmc, would I still have to physically flip the DIP switch on the i.MX8M SOM in order to write a to u-boot successfully, or can I just leave the switch in the default position and actually “unforce read-only” through toggling this sysfs flag temporarily?

Hi, these two things are unrelated. The physical switch is for telling the i.MX8M ROM bootloader to load u-boot from eMMC vs SD. The force_ro is a pure software/kernel setting to allow you to write something like u-boot to eMMC.

I had a feeling.

Thanks for the quick reply!

I followed the instructions and they worked but it uses the old version of the kernel from the eMMC. I was able to fix this by flashing a new recovery system.

Then reboot into recovery and set boot medium again.

Now it boots without SD card to NVMe with the latest kernel.

I have a much more basic question than some of the other issues in this thread. What should be the partition scheme for the ssd, and what is the “correct” way to run the reform-migrate script?

I tried what I thought was a rather basic partition scheme of:

I think I mistakenly assumed the reform-migrate script wanted to use the first partition to install some boot stuff, but the program bugged out. Now I can’t even get the system to boot from the SD card (kernel panic).

Obviously I’m still a little confused about the whole boot process on this system.

Boot partition lives on the SD or eMMC, the SSD does not need one. I created a Master Boot Record partition map with fdisk and a single partition. I formatted it as ext4 and then ran reform-migrate /dev/nvme0n1p1

If your SD card was corrupted, you can make a new one with the latest image reform2-imx8mq · Artifacts · build (#426) · Jobs · Reform / reform-system-image · GitLab

Happy to report that I am now booting from the SSD! From my perspective, this is a huge speed and responsiveness improvement – ballpark 3x speedup all around, maybe more.

One question: I partitioned my drive such that there is a swap partition at the end, but I’ve noticed that when running free the system reports that there is 0 available swap space. I suppose this is some deeper-level linux thing I just don’t know, but is there some way to automatically read the swap space on boot and configure it correctly?

You need to do more than just create the partition.
First you need to set it up using mkswap /dev/whatever where whatever is your nvme partition such as nvme0p2
Then you can manually enable it with swapon /dev/whatever and it should show up. To make it permanent you can then add a line to your /etc/fstab

You might want to use UUID instead of /dev/whatever in case you ever change your partitions.

Is there any reason to use a swap partition over a swap file for an SSD?

True, it was just easier to show it with a device name rather than UUID, on the reform it’s likely not an issue either way as you can’t attach another nvme ssd if that’s what you’re running from.

A reason for a swap partition over a swap file is speed, though I’m currently using a file myself as I forgot to make the partition. With the partition it doesn’t have to go through the filesystem layer to access data, it’s doing direct disk accesses. With a file it has to go through the translation and possible fragmentation of the swap file, which may not be contiguous.

If you resize your primary partition and create a new partition before the swap, could the device name change from nvme0p2 to nvme0p3?

According to this thread, the kernel will bypass the filesystem when accessing a swap file. LKML: Andrew Morton: Re: Swap partition vs swap file