With the news that my post-crowdfunding Reform will soon be on its way (yay!), I thought it would be a good time to ask a question that has been bugging me for a bit.

You may be tempted to try cells of other chemistries like Li-Ion or NiMH, but never do this, as these are incompatible.
Only use LiFePO4 cells with MNT Reform!

Why is this so? Could the Reform’s design be modified to incorporate battery cells with higher energy density?

I tried searching (and asking) around to understand why a charging circuit would be incompatible with certain chemistries, but didn’t find an answer. I’m a novice to electronics, so I’d be happy to be pointed to a general reference to understand the principles behind this warning.

Different chemistry uses different voltage. Nominal and charging.
Eg. nimh is 1.2V, LiFePO4 3.2V, Li-Pol 3.6, Li-ion 3.8V. And applying wrong charging cycle may not only destroy the battery but also something around it (set on fire). Since LFP uses the lowest (of Li) voltage it’s not as dangerous (won’t overcharge other Li-* chemistry) but still won’t do any good, because a charger should control not only overcharge but also undercharge.

Cool, thanks! I did some more digging around, and it seems like I could potentially tweak board_reform2.c and change the voltage thresholds to fit the charging curve for my lithium ion cells.

I guess I might also need to modify something else (boost converter settings?) so that the output voltages are all correct, but I have no clue about this part.

I strongly advise against using Li-Ion cells. These cells have big drawbacks:

Thank you for the bold and emojis

You definitely raised some interesting points about Li-Ion cells that I didn’t know about. For me personally, the benefit of >2x energy capacity (for the specific cells I’m comparing) compared with LiFePo4 is hard to ignore for a portable computer. Do you know if there any chemistries that strike a good middle ground between really low density and being a hellish safety hazard? Or alternative ideas to increase usability of a portable computer making use of LiFePo4 cells?

Rest assured, if I do ever attempt to use Li-Ion cells I will do so outdoors while interfacing with the device with a 10 meter pole! Of course, I would also run all of my related modifications by an engineer who actually knows what they’re doing.

Unfortunately, there is nothing much between Li-ion and LFP in terms of energy density. The dangerosity (and energy density) of a battery grows with the cell voltage, and roughly the volumic energy density grows with the cell voltage. Physics, or electrochemistry!
If you have dozens of engineers and a couple safety and regulatory specialists in your design team, the risks of Li-ion can be mitigated (which include the big legal consequences if somebody gets hurt). That’s how high performance batteries (i.e. light weight, but low cycle count and bad for the environment) get into commercial laptops.
OTOH the Reform is basically a (little over one)-person project for its electronics, and the excellent designer(s) wisely chose tinkerer-safe batteries.
If you want really low density but 20000+ cycles, there is lithium titanate (LTO). Heavier than LFP, but even safer (LTO is a ceramic…).
Alternative ideas? One would be to focus on low(er) power use.
Although the Reform with I.mx8 isn’t bad (6.5 to 7.5W) in that respect.
Or use a flexible solar panel the size of the back of the screen. Find one with 24V output and let the power circuit handle the rest… However I haven´t thought this out.
Remember you can connect anything between 10 and 32V on the power input, so a car/boat battery works fine. Commercial laptops don´t do that.

Unfortunately, there is nothing much between Li-ion and LFP in terms of energy density.

I don’t refute this, but for some reason this fact is not reflected in commercially available 18650 cells

LTO’s look fun, thanks for pointing me to those

As far as solar goes, my area doesn’t offer much sunlight. I think I’d be better off computing by the river with a hydroelectric generator. Cheers!

I agree with you here, it would be better if he uses LifePo4, they generate way less heat, plus the stability is also way better. I looked this stuff also, I barely understand how electronics even functions in this world, but that being said, software is much, much easier to comprehend and basic information about hardware.
Such as stability for hardware… the internet with all its flaws is helpful in finding this stuff out.

I can understand not suggesting people use lithium-ion batteries, but what about NiMH? Assuming you could sort out the voltages, of course.

Chemistry is ok, safe and sound, but energy density is even lower than LiFePO4, also the availability on the market is very low to find suitable density (should be at least 3x1.8Ah - 5.4Ah) - max I found is 4.5Ah. Then theoretically it is possible to boost 9.6V for other power rails.
Edit:
Or did you mean stuffing the chassis with AA-size cells? Theoretically stuffing in 16 AA cells should get comparable capacity:

I had meant being able to buy an addon, kind of like how lenovo has different cells of batteries, like 3 cell, 6 cell and 9 cell…
Only in this case, with LiFePO4 batteries.

Side note, how much electricity, would be used on a 14 inch device doing stuff like web browsing, if you have 8 of those batteries, compared to a 7 inch. I am curious, how many times my omnicharge ultimate would be able to charge something that small. I have one of these: 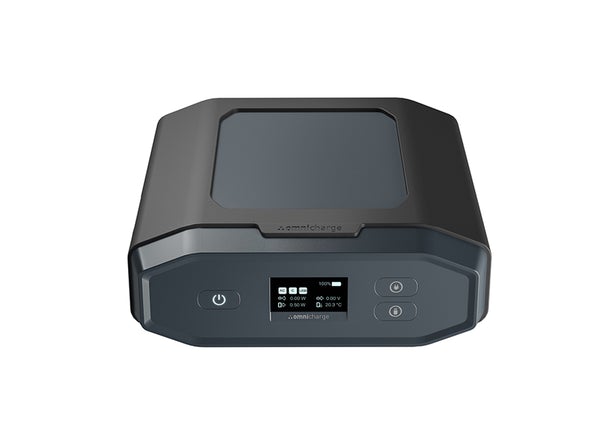 Find the ultimate power bank in our Omni Ultimate which takes the best from all our products to bring together flexible power and trailblazing innovation.

Just to be clear, not advertising here, just wondering how many times such a device could charge something half the size of the current mnt reform if it had similar, specs except the size + the other changes, which I assume are more about how much the size can handle.

I have a feeling, its like at least 4 times, due to the fact, that I have a number laptop, with twice the power in it, although, that is the way the original would be by my calculations… but it could possibly be way more, even 10… but yeah, no idea.

I compared what I heard about the mnt reform, to the x200, a crazy comparison, I know…

I wonder if anyone else here has an omnicharge ultimate and mnt reform. That would be extremely interesting if so.

Piggybacking on your note, @Sable I managed to find this thing (actually mine is only a 12 cell version apparently by the same designer, I hadn’t seen this larger one before

) on AliExpress and have had good luck with it so far. It does about ~22W fast charging with USB-C PD so based on another post I saw here recently it should perform quite well charging the Reform. It already does decently with my tablet PC which sits around 10W for most of my workload, though charging is quite slow unless the PC is off.

This is quite a bit cheaper than the pre-built packs you can find on Amazon. With about 120Wh of cells I am about $88 in the hole including the cost of my 12-cell case. Another nice bonus of these is that the higher end models include a wireless charging coil if that’s your speed. No explosions yet either.

One thing I’ve noticed is I’m not really getting 120Wh of charging in my devices, though I haven’t tested this rigorously. I guess there’s some inefficiency when converting to the various output voltages for supported devices.

But I wonder what the difference is between the one you have, the one I have and also, how much watts gets used when you have to fully recharge after it hits 0. That being said, I appreciate you trying to help me figure this out.