Another ergo keyboard design for the reform

Count me interested. Keep us updated if you can, as I’m sure the development process will be interesting!!!

Extremely cool! Looking forward to your progress on this.

I had originally planned to make something like this based on my Atreus design, but I got tripped up by the requirement to drive the OLED and other things the stock Reform keyboard does beyond just being a keyboard. I was trying to take an existing PCB design and adapt it to the Reform instead of taking the Reform’s PCB and adapting it to a better layout.

What’s the next steps here? Is there anything you’d like help with? Are you planning on placing a production order for extra PCBs to sell or trying to gauge interest?

The staggered keyboard has been one of the things about the Reform that bugs me the most, so the opportunity to fix that problem is very exciting to me!

Thanks for the interest & offers of help.

I’ve done some work on the ergonomics. I reduced the vertical switch spacing and I’m trying two tightly spaced 1U thumb keys instead of a 2U and a 1U. The 2U was fine for tapping but wasn’t comfortable to hold (I didn’t expect that). image of current design

The next step is to lay out the PCB again, and I’d welcome thoughts on how to prototype during the chip shortage. The TQFP atmega32u4 is not available this month. The VQFN is in stock, but I often fail doing VQFN by myself. It isn’t economic to do commercial assembly for a single prototype, so I’ve gone back to the idea of using an elite-C microcontroller. With the new switch spacing there is just enough room underneath the LCD. The Elite-C’s USB port won’t be accessible, so I may need to make a little molex-> USB adapter cable.

How does everybody else sync between making laser cut designs in free or openscad & pcbs in kicad?
I now have an ugly hack where I have OpenScad echo switch locations to a CSV file, and a python script for placing each part in kicad. This doesn’t feel like the right way.

I’m still teaching myself and don’t want to start a keyboard business. The people at MNT did a lot of testing and set a high bar that I can’t match

I’ll keep showing my progress, and it’s open source if others want to fork and improve.

I like the idea of using the Elite-C as a daughterboard; it makes the assembly a lot more approachable. It looks like there’s a new v4 of the Elite-C which is even more low-profile.

Where do you have the Elite-C in the current design? If it were me I’d just toss out keys mercilessly to make room (who needs a number row!) but I get that not everyone is accustomed to the fn layer as I am.

Hi again, we now have a solution for avoiding the MNT trademark on derived OSHW designs while still referencing MNT Reform / showing that your product is meant to be compatible:

Progress update, with an unusually bad photo. There is room for the elite-c keyboard controller while keeping all keys, and for the keys in the upper corners. I needed to move the thumb keys another few mm, but they should work. Thanks to nice folks at keeb.io, I was able to get the x,y location for the USB pins on the elite-c, and should now be able to route the board. 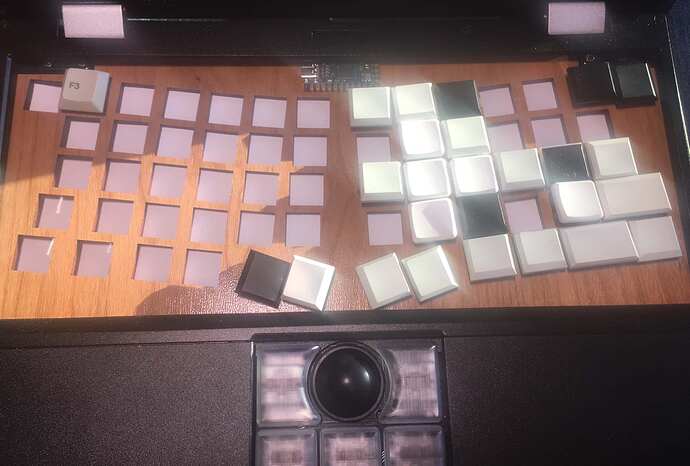 oh that’s cool. when my MNT shows up (Crowd Supply asked me a month ago to change my mailing address from a PO Box to an address, no movement since), and if you get a chance to push that new PCB design that leaves room for the full MCU, I’d be happy to give a go at testing this with a SparkFun Pro Micro - RP2040 - DEV-18288 - SparkFun Electronics (I have several here, but they’re otherwise backordered indefinitely, RIP) and my Python-based GitHub - KMKfw/kmk_firmware: Clackety Keyboards Powered by Python. the controller should be fairly drop-in compatible, and the Python layout definition should be manageable (though I haven’t played with OLEDs on KMK - I think the community has contributed PRs over the past year or two tho)

The chip shortage has made this project a pain. I routed a 32u4 tqfn, but no board house can get the part for less than $40 now. The pro micro form factor just doesn’t have enough pins for a 60key + serial + i2c. My idea of using an elite-C won’t work because it’s 5 volt only, and I didn’t want to level shift everything. I may come back to that. I tried with a Teensy2, and could only find the through hole version of the voltage regulator.

I’ve finally settled on the adafruit itsybitsy 32u4 3volt. It’s cheap & in stock, and it has enough pins if we air wire from the USB socket to the board.

My last step is to find a power switch that fits on the board so that I can cut power to the keyboard. That should allow a range of firmware without worrying about the power save states.

@mntmn is working on an alternate board layout using some different components. Might this be of help to you? reform2-keyboard-pcb · keyboard-mostly-1sided · Reform / reform · GitLab

Next draft of my ergo keyboard is now up in reform/reform2-keyboard-pcb at ergo1-itsybitsy · milestogo/reform · GitHub .

It retains almost nothing of the original MNT design

I’m going to order boards & see how I did in the next few days. Comments & patches welcome.

I’m really interested to see how it looks in the Reform. When you get the boards and have one assembled that would be awesome to see.

Thanks for the update!

How much space do you actually have, vertically? I’ve been dreaming of a through hole design, possibly kinda split ortho with the mcu & stuff in the middle. but the mcu for that might be too fat?

By the way the latest tweet from Jaqueline shows that she’s using hot swap sockets and it seems just fine. So don’t discard the idea 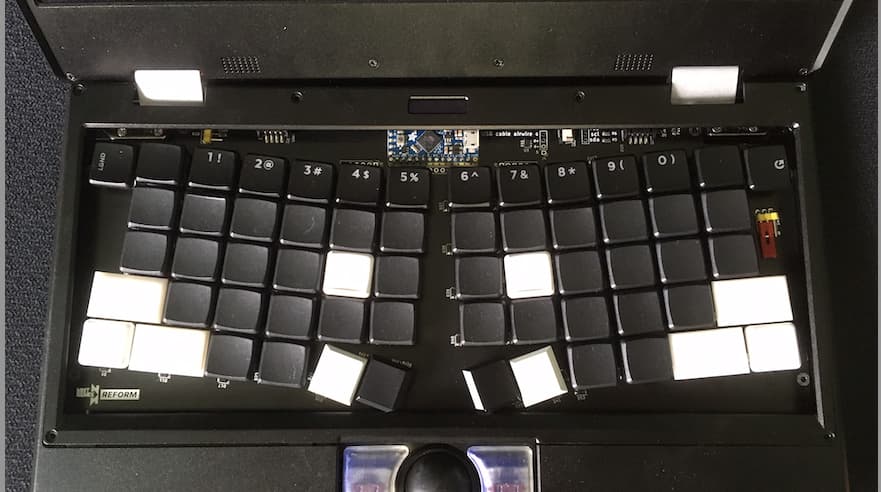 The layout fits and I’m fairly happy with it. The lowest thumb keycaps needed a bit of trimming, but they’re comfortable.
The board works with QMK outside the reform, and I figured out serial code that should talk to the LPC and display battery voltage on the OLED using the same font as the stock firmware.

… And in the process of plugging it for final testing I broke something on the motherboard. Until I have a repair or replacement, I’ll have to put the keyboard project on hold.

Keyboard is mostly working now with the stock firmware. I’ll upload as soon as I get through my current bug list. (wakeup from LPC sleep, one inexplicable missing key).

QMK isn’t going to happen soon. I think it will need to change main() to delay usb initialization until after the LPC has been found.

In case it’s on your list, I recently fixed a problem with the deep sleep code in the keyboard firmware (not the LPC fw, and also unrelated to the keyboard waking up the LPC/system).

Powersave is stopping me. I think I got all the bit math correct in ergo_reform/powersave.c at main · milestogo/ergo_reform · GitHub to watch the correct pins. But it doesn’t work at all. On first power up, the keyboard talks to the LPC and all is well. When I put the keyboard into suspend, nothing comes back until I reset the MCU.

I’m starting with devkev@'s patch. Either I am making a simple bitmath mistake, or there’s a hidden re-use of the AVR pins that I’m just not finding.

If you’re interested in modifying keymaps in the stock firmware, ergo_reform/matrix_ergo.h at main · milestogo/ergo_reform · GitHub and the KBD_VARIANT_ERGO defines should show where to start.

maybe @Chartreuse has an idea?

Hey polydactyl! I’m thinking about putting together my PCB. Thanks for handing these out! So neat!!

Just getting confirmation on a few things before committing…
The Atmega-based board is still sold out. Do you think the keyboard design will work with the Adafruit RP2040 itsybitsy along with the upcoming keyboard firmware for 2040…@mntmn is that available yet? I assume the voltage regulator still needs to be removed/bridged, right? And the 5v rail should be severed (as noted on the back), and replaced with 3v3?

Due to the tight clearance with the hotswap sockets, I might just do through-hole keyswitches for the entire board (I had some white v1s that I test fitted and they seem fine). I need to look into the RGB lights…I will miss full backlighting but if I can get this working at all I’ll feel like I accomplished something! It’s a little ambitious with my skills but I’d hate to let this board sit around.