I recently noticed that my MNT Reform wouldn’t run on battery power. It wouldn’t turn on unless plugged in to the wall. If I unplugged it while it was on, it would shut off immediately.

I flipped it over, and it turned out that one of the battery cells is leaking slightly. It left a tiny dark spot on the cover.

Was this likely a faulty battery cell from the manufacturer, or is there a chance I did something wrong to cause this failure?

I have barely used the Reform since I assembled it in June. For the last five months, it’s been plugged in on my desk. I have played around with it a few times, but I don’t boot it up very often.

The OLED battery menu showed a total voltage of 0.52V and a voltage of 5.3 (!?) for each individual battery cell.

After seeing the leak, I unplugged the battery packs from the motherboard and removed all of the battery cells. I confirmed that they had all been installed with the correct polarity.

Do you think I should expect to replace all of the cells, or can I just replace the one that’s clearly damaged?

Here are a couple photos for reference. Sorry about the poor quality. 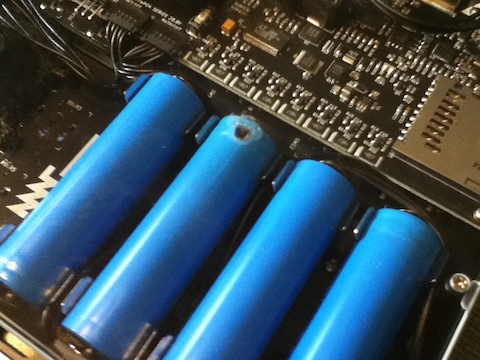 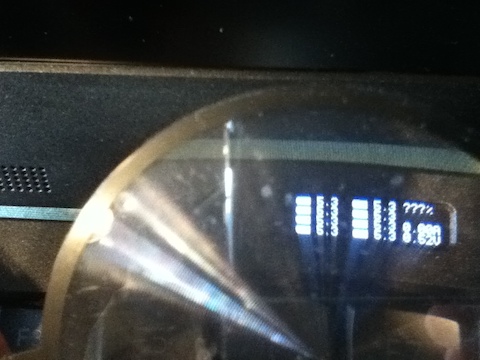 Hi, I’m sorry this happened to you! First, take out all of the battery cells, and then measure them with a multimeter. There are already threads in this forum about reviving cells, see, for example: Battery is not charging - #9 by hartkopp. Fortunately, the battery cells are inexpensive and not very dangerous.

Also, did you upgrade the LPC and keyboard firmware as per MNT Reform: Recommended LPC and Keyboard Firmware Update to fix Battery Drain in "Off" State ? This will avoid these kinds of problems in the future.

I dug up a multimeter and measured the batteries. If I’m reading it correctly, they are very discharged, measuring less than 0.1 volts.

I’ll try to follow some of the steps mentioned in the other threads to see if I can revive them, but I assume that I probably won’t get them working again. I have ordered replacement cells.

I didn’t upgrade the LPC and keyboard firmware yet. I will see if I can do that later this week.

I got the replacement cells that I ordered, and my Reform is up and running again.

I did the Keyboard and LPC firmware updates today. Thank you to @plattfot for this step-by-step walkthrough. I found it a good supplement to the official instructions. After performing both updates, the OLED battery screen now shows the “On” or “Off” indicator, so I think it all worked correctly.

I also ordered a NiteCore “NEW i2” battery charger that I had seen others mention on these forums. I’ve been able to use its Recovery mode to restore the original batteries that were discharged. It takes one or two minutes in Recovery mode, and then about two hours in LiFePO4 mode to get each cell back to full charge.

Now I have several spare LiFePO4 batteries, but nothing to do with them. I’ll probably look around online and see if there are any useful gadgets that can use this battery. Does anybody have any suggestions for putting LiFePO4 batteries to use?

Thank you @mntmn for your help and support.

If you tinker with RasPi, this device uses an LFP battery as an UPS.
You mayfind it here, and I think I have one which I do not use if you want it.

I don’t do any Raspberry Pi stuff, unfortunately. Thanks for the suggestion, though. It looks like a handy device!