In the first few days of using my Reform, I accidentally let the battery discharge completely. Ever since, I have encountered various issues with the batteries & battery indicator.

The batteries were so deeply discharged that for a long time, I could not start or use the computer whatsoever unless it was plugged in and charging, and the Circle+B menu showed 0.0V on at least 3 cells. I was able to get 7 replacement cells, which work well, and I also managed to revive a few of the original cells using an external charger. With the replacement cells & revived cell, the laptop now works even when it is not plugged in.

I thought that would be the end of my battery struggles, but the 8th cell, one of those which I revived, shows spotty performance. It seems to deplete much faster than the other 7 cells, and consistently displays a lower voltage on the Circle+B menu (around 3.5V for the healthy cells, vs. anywhere from 0.0V → 3.3V for the “undead” cell). Additionally, the battery percentage is almost never accurate - it usually displays 100% for an extended time, and then rapidly declines to 0% within the span of minutes.

This morning, I started the laptop and noticed that the battery was empty, and refused to accept charge. I assume that it had not properly entered the power-save mode the last time I had shut it down the night before. I always shut down via the command line first, and then use Circle+0 afterwards to be safe. Nevertheless, I swapped out the 8th cell with another one of the revived original batteries, and then began recharging.

The battery status was unknown (???) for some amount of time, and after reaching what I assume is full charge, it has decided that it is actually 0%. It is assuredly not at 0% battery, since I can disconnect the charger and use the computer normally. It has not changed from 0% in several hours. I am not sure whether this is strictly a problem with the 8th, half-functional battery cell, or if there is also an issue with the battery status indicator. 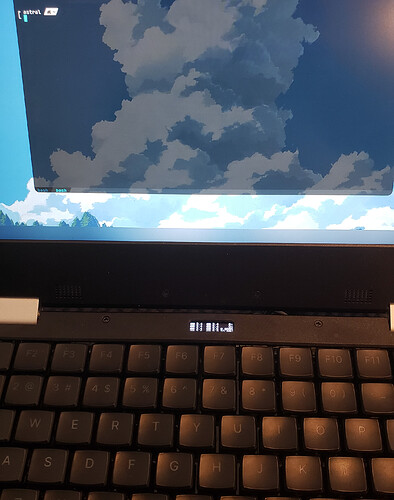 I would like to know if anyone has any thoughts about this, or if there’s a potential fix that I have not tried yet. I am already using the recommended updated keyboard and LPC firmware. I try to take great care of the batteries in all of my electronics, so as not to over-charge or over-discharge. As such, not being able to view the battery status accurately is worrying to me.

P.S. I have tried turning it off and on again - numerous times

Nothing specific to your situation as I have never let the batteries run down on accident.

However, you have to run down the batteries for the gauge to be accurate when changing battery capacity. And so the readout said I was at 0% after a time. Only the Reform stayed on for another hour and 12 minutes before powering off (the true 0% time).

After immediately plugging it in at that point, charging began, and the percentage was accurate again.

I say all of this because the BMC is expecting all of the cells to be 1800maH cells. If one is not, or several are not, (IE: they are not uniform in their capacities) this can lead to erroneous information on the battery readout.

Hi, the 0% sounds like a calculation bug in the LPC firmware. My recommendation would be to reset LPC using the LPC_RST button. In future firmware revs, we should include more debugging facilities for these kind of cases. I’m sorry for the inconvenience.

No worries!
I reset the LPC 2 days ago. After some time, it seems that the battery indicator is back to normal function. It is still somewhat inaccurate - I noticed that the battery status “ran out” to 0% before the battery was actually empty, and I was able to continue using the laptop and charge it back up past this point.
It’s possible that the remaining inaccuracy stems from the mixed performance of the battery cells, and if I were to get another healthy replacement cell then it would be resolved. Either way, it is now reasonably accurate, enough that I do not consider it malfunctioning.
Thanks so much for the prompt reply & help!