Important: Do this safety modification

This is why we now manually clip off those overly long pins from the power input jack and additionally isolate them with tape before shipping. Most of the EU devices that we sent out so far do not have this treatment though.

To my knowledge the issue has happened only once in the field and once in the lab. But to make sure it doesn’t happen by accident on your device, I recommend to shorten (clip off) the 3 pins of the power input jack on the back of the motherboard with side cutting pliers and also put some isolation tape there, just to make sure a short can’t ever happen.

Can you post a picture of these pins, please?

Here’s a close-up of the 3 pins shortened by us: 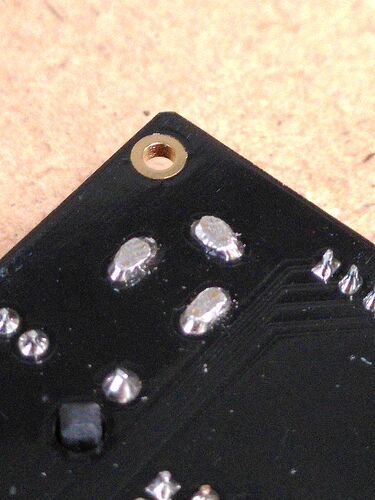 They’re in the upper left corner of the motherboard in this picture:

so we should/must pull out mainboard to shorten these pins? or could it be done by only removing the keyboard?

I think pulling out the motherboard is more comfortable, also you have to remove the batteries anyway before this operation.

Alternatively you can also just put thick isolation tape there, and this should be doable by only lifting the keyboard. But anyway, I cannot stress enough to take out the batteries as a safety precaution. You don’t want to zap anything by accident.

Thanks for the heads up!

I was kind of worried about that when I first assembled my Reform, seeing that there was no insulation between the two PCBs except for the empty space, and given that the keyboard PCB can flex quite a bit if pressed hard (not that I press hard on my keyboard, but it’s possible).

I’ve clipped the power jack’s pins and added a thin sheet of plastic the size of the motherboard between the two PCBs, that should eliminate that kind of problem for good. ^^