I have to admit that this is incredibly compelling to me. I have been looking at the prototype pictures and just have a few questions. I know that things are still in the works and that some questions just can’t answered at this stage in development.

The two questions that I have which I feel could be answered at this stage are:

Thank you very much for any feedback on the subject. Really looking forward to getting going. As a software engineer in my day job, I’m hopeful that the Reform will be able to quite a few projects I have in mind.

It actually will use LifePO4 batteries if I recall correctly.

Although I have been told its in the early stages of planning, and it won’t be talked about for the time being. I also recall him saying it won’t be beta for at least a year or two.
He can correct me if he wants, but yeah… it seems dubious at the moment that it will be out sooner.
I would love to use OpenBSD on it if that’s possible until other options become available.

I wonder about the specs it will have also, but its probably better to leave my thoughts out of this beyond what I have said already.
It almost seems somewhat taboo for the time being since its so early in the stages of alpha.

But it is in fact exciting to know he is planning this!

I just hope that the price for this device is a few hundred less.

I have used a 1 Netbook Onemix 3pt for about 2 years now: 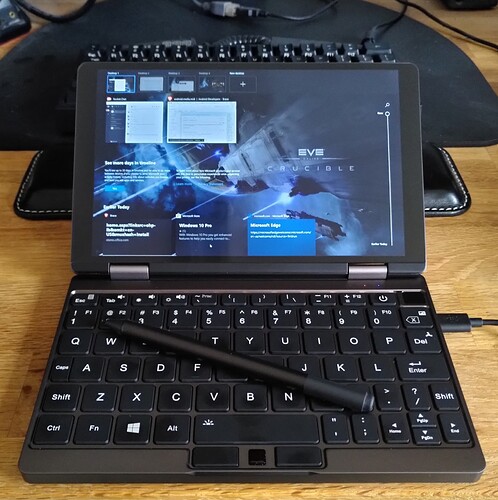 Onemix3pe1920×1926 239 KB
It is an amazing piece of technology that is incredibly powerful for its size. I have been up and down the tech ladder and have seen CPUs at all sorts of compute levels. What I’ve found is that a smartphone is powerful enough to handle nearly all of our computing needs.

So while the CPU in the Reform and presumably in the Pocket are diminutive compared to x86 and other ARM applications, they are powerful enough to do everything. Where power is required SSH and VNC are waiting to fill the gap.

The problem with the Onemix above? You can replace the battery, but because of how shrunk the PCBs are, everything is soldered. Nothing is repairable without a reflowing machine and some advanced equipment.

As it is made in China gets parts is also nearly impossible.

The Pocket on the other hand is the absolute opposite. It is small enough to be brought with me everywhere. Yet robust and repairable enough to not make me apprehensive of doing that.

I am looking forward hearing more about it and its eventual release.

I imagine it could do most things, short of running something like citra or qemu and for the time being, dosbox-x.
A few things I wonder:
Will battery Life will be more than 8 hours? Or have the potential to run that long with some sort of extender battery?
I know its 5.5 inches at the moment that he is planning though but in essence, I want to know these things in general.
I also wonder how suspending will work regarding battery life too though and if you can have it suspend after a certain amount of time by default either in the system settings before it boots, or within whatever OS your using, among other things some of which I mentioned above.

On a side note, the netbook you showed looks very interesting, but I now wonder, is it as close to libre? As in, do you need blobs on the software end to run anything?
Also, does it have any backdoors like intel me in it?
This is of course, not important, but I am always curious about stuff like that.

Btw, when I listed qemu, I meant it would be slow as molasses, same with citra if there was any support for it and dosbox-x as well.

Apparently there will be 2 versions: a normal and a premium

The premium will have an aluminum enclosure, or at least that was what I inferred.

Of course until MNT has officially announced things it is all subject to change.

I really like the direction here. The mechanical keyboard and the mini trackball are absolutely the right design choice IMHO.

On a side note, the netbook you showed looks very interesting, but I now wonder, is it as close to libre? As in, do you need blobs on the software end to run anything?

No, nothing on that cares a thing about FOSS ideals. It is a standard laptop in that regard. Just like a Dell or HP.

Hmm, okay, just wondered, and cool its good to know that an aluminum enclosure will be available!

Btw, I don’t like the touchpad, due to how much I use the trackpoint.

And yes I look forward to hearing more also.

@mntmn Do you feel like it is time to start sharing a little information about the Pocket Reform?

Speaking of Pocket Reform, I am now curious, if this device will use less electricity to power then the original MNT Reform and by how much, even an estimate, would be extremely interesting.
Display usually is one of the biggest power drains on computers, hence why I am curious.
Considering it has a display somewhere between 1/3 and 1/4 less than the original as a designation in the future, I wonder…