I see the heat sink is right next to where a NVME SSD is. I’m not aware of how hot the CPU runs in the Reform. I’ve seen the Librem 5 hit 40-50C under idle. As the bottom cover of the Reform is acrylic and not aluminum, how effective is that heat sink? Does the bottom cover just create an oven effect?

Heat is the killer of electronics and SSDs typically run pretty hot. I’m wondering if the thermal situation here might lead to premature SSD failure?

I’ve done some thermal testing of the Reform, and the heatsink is enough to keep the CPU from hitting its throttle point: the peak I measured was about 67°C, using the internal temperature sensor - and it dropped back down to 60°C in the five-minute cooldown period at the end of the benchmark, showing that the case doesn’t trap too much heat. 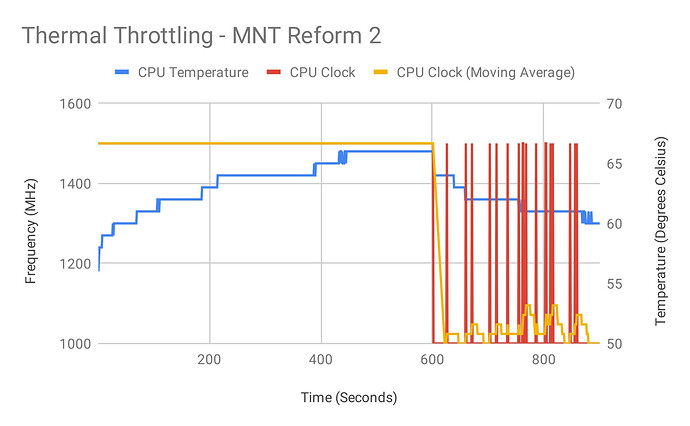 A common misconception of NVMe hardware is that, like most electronics, it has to be kept cool; in fact, the flash itself needs to be above a minimum temperature for efficient operation. Cool the flash too much, and the controller will actually pump additional power to it in order to warm it up. At no point during testing did the NVMe - I ordered the full Max kit, so I’m using the bundled one - reach anywhere near its throttle point either, so I’d say you’re good to go.

The possible exceptions: if you’re running the CPU and the NVMe at 100 per cent load for hours at a time, things might get toasty. Likewise, I’d have to revisit my testing as and when a more powerful SOM comes out. But for now, I’d say it’s not something you should have to worry about.

What an excellent response! Thank you very much! I am happy to hear all of it!

A simple modification I did to my reform, to improve the thermals, was to add a small 1mm thick thermal pad between the top edge of the CPU heatsink and the aluminum case. I noticed the gap was small enough to bridge with one, just loosened the heatsink, installed the pad, and squished the heatsink against it when retightening.

I do not have an concrete numbers as the thermal sensor with my custom kernel build seems to stop responding after a minute of so of uptime, but the back of the case where I bonded it to does get noticeably warm and I do believe the bottom acrylic does feel a bit cooler after extended use or when sitting on a soft surface compared with before.

As for NVME thermals, I’m not sure I agree with wanting to heat it up as they can thermal throttle under heavy load. I did add some small heatsinks I had to mine to increase thermal mass, though that was partly also for looks. The main point here though is the Reform only has a 1x PCIe 2.0 link to the SSD which effectively limits the speed to 500MB/s at absolute maximum, so you’re not going to be stressing the SSD in any meaningful way that’d cause it to overheat.

I’m not sure I agree with wanting to heat it up as they can thermal throttle under heavy load.

You don’t have to agree, it’s just how they work. JEDEC specs for NAND flash target a 40°C operating temperature. Drop that to 25°C, and the data retention lifespan is cut in half. JEDEC JESD218A, if you’re curious. As a result, controllers will detect if the flash is too cold to ensure a minimum data retention period and push current through it to heat it up - wasting power and potentially shortening the hardware’s lifespan, ironically.

Yes, high-performance drives can throttle under load, you’re right - but, as I said above, at no point during my testing did the NVMe drive in my Reform get anywhere close to its throttle point.

Neat trick with bridging the heatsink to the chassis, though - might do that mod myself!

Neat trick with bridging the heatsink to the chassis, though - might do that mod myself!

Based on the pictures I saw, I thought that was already done by design.

Based on the pictures I saw, I thought that was already done by design.

Nope - it’s hard to see, but there’s a gap both under and behind the heatsink. You can just about see it in my shot here: 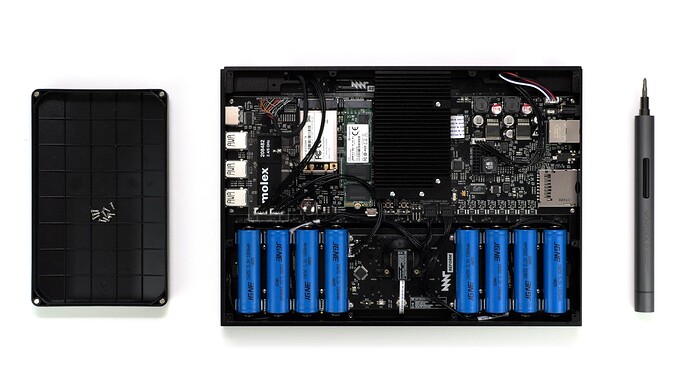 Thank you for the picture and confirmation. I really can’t wait to receive mine. The design is well done on this. It reminds me of a early 90s ThinkPad.

I did add some small heatsinks I had to mine to increase thermal mass, though that was partly also for looks.

Could I trouble you for a picture of this? Would cool to see how it looks.