Heck, let’s take it one step further: separate the system controller + oled and the keyboard controller onto their own board and provide a matrix scan bus connector. With that lot’s of experimental keyboards could be built without any controller, just plug them in and reconfigure the scan codes in the existing firmware.

Perfect. I can’t get it done, but I can fund it. Any takers for the bounty?

Great, I sent you a dm

Just wanted to add that I too would love an Atreus for the Reform. My main driver is a Keyboardio Atreus with whites and a Colemak layout.

But it fits well the Atreus and my needs.

Based on what I now know after GitHub - milestogo/ergo_reform: ergonomic keyboard for MNT Reform laptop. I’d start with 2 CPUs on the keyboard board. One 3v3 powered one for oled & I2C, then a second USB powered one for the keyboard. The added $10 in parts will be saved in every user’s time. Trying to balance updates between complex keyboard firmware & LPC firmware is going to get frustrating. Of course that doubles the problem of getting enough chips.

Riffing on the separate LPC board / keyboard, my first thought was to have the BYO keyboard use the 6 mounting screws, with a carved out section under the OLED & where the serial link is now. The keyboard can connect to the USB JST. Then use .1 header or USB connectors to structurally suspend the LPC /serial board, and connect a few pins for the power, arrow & enter keys to talk to the LPC firmware.

My second thought is to build a new OLED board that can also talk to the LPC. Put the JST connectors on the bottom (vertical entry?), and a USB connector for the keyboard. Keeping it small enough to fit under the bezel would require a source of VQFN atmegas. If we allow the OLED board to bulge out over the center, there would be room for a set of micro tactile switches in front of the current bezel, above the new keyboard. In theory that LPC control board with a USB connector would be certifiable.

Purely as a size comparison, a full size atreus would fit very well into the space allotted. Of course slim switches would have to be used. I would be very happy with a keyboard like this. 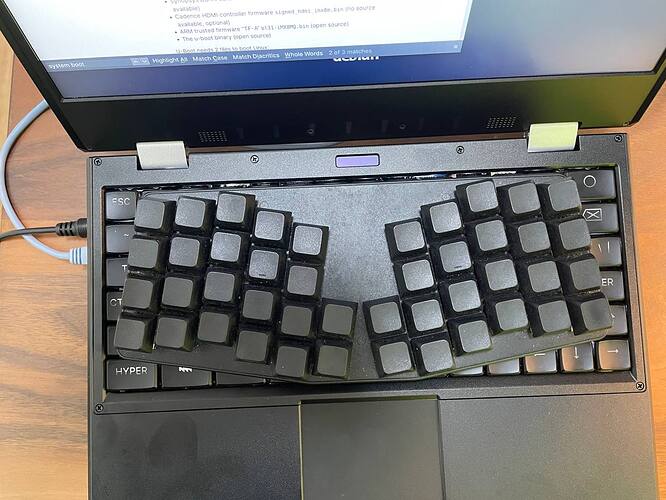 connect a few pins for the power, arrow & enter keys to talk to the LPC firmware

I worry that an approach like this would trade away the existing KB/LPC complexity, for increased complexity around this. Sharing pins like this sounds very sophisticated - eg. how do you prevent the keyboard MCU from interpreting keystrokes that the LPC is trying to “intercept”? If the keyboard is running at 5v, and the LPC at 3v3, do you now need level shifters in between on these shared pins?

On Twitter Lukas said that the input devices and LPC are going to be converted from AVR to RP2040.

separate the system controller + oled and the keyboard controller onto their own board and provide a matrix scan bus connector. With that lot’s of experimental keyboards could be built without any controller

I really favour this approach. I use a traditional keyboard and have no interest in an ortho/column staggered design, however, I do expect to want to tweak the stock keyboard layout for my tastes. Trouble is, I’m not quite sure which exact layout would be best, and the chip shortage means I’m stymied in terms of trying to prototype it.

I’m thinking the USB and SYSCTL headers could go to a small “keyboard controller” PCB, probably in the area near the SD card reader. This would then be connected to the “dumb” keyboard matrix PCB via FFC or wired tiny-pitch connector (eg. similar to the eDP display one). The LED chains could also go via this connector, or maybe another one (or for prototypes, just ignore them).

With this approach it should be much easier to test out designs, because once you’ve made one of the small controller boards, each of the “dumb” matrix PCBs just needs a bunch of Kailh choc sockets, diodes, and an FFC connector. Unfortunately this is now well outside “just tweak the existing switch positions a little” territory…

connect a few pins for the power, arrow & enter keys to talk to the LPC firmware

I worry that an approach like this would trade away the existing KB/LPC complexity, for increased complexity around this.

I was thinking of running 2 matrixes from the LPC facing board to the keyboard- a 2x2 for the LPC, and the rest of the pins for keyboard. That solves the voltage problem, and allows a keyboard builder to move things around.

Another idea I wish I had earlier - what if the trackball board becomes the LPC facing board? There are enough buttons on the trackball to navigate the OLED screen. You’d need new Oled ribbon & serial cables, but the keyboard could be a standard 5 volt device.

Yes, but of course that would render the touchpad option useless. I think combining the system controls with either the keyboard or the trackpad is equally bad and will create pain down the road.

I think a self contained control unit with screen and three buttons (up, down, enter) is the way to go.

Either that or the control unit uses the standard keyboard for input (up, down, enter), whatever keyboard it is.

I think the former is cleaner.