Several times now I’ve experienced the following issue. After normal use, and plugging in the reform while it is off, if I try to turn it on it is completely unresponsive – no LCD, no LPC wake-up indication, nothing. Normally I have to hit circle a few times to get the LPC to come to life, but now nothing happens. Strange thing is, if I open the case, unhook power from the board, take out the batteries, put them back in, then reconnect power to the board, everything will come back to life just fine. And the batteries will work well and seem to be at the correct voltage.

(I have the updated keyboard and LPC firmware installed)

In my case — after firmware update — holding circle key for about a second or two brings LPC menu back to life.

Btw, last i tried, just reset the keyboard is enough to have it back on again, without need to unplug/replug the battery fyi

I have also been using Circle+0 from time to time, so that may be the culprit. What do you mean by “resetting the keyboard” – is there some key combo that does it without me having to unscrew anything?

I have the same issue very often

I am also encountering this issue.

Hi, can you tell me how to reproduce the issue? Is it after turning off the computer with Circle+0 instead of shutting it down from the OS? Also, maybe a silly question, but you know you might have to hold Circle for 1-2 seconds if the keyboard is asleep with the updated firmware?

I cannot speak for the others, but I’m not 100% sure how to reproduce this. I do know that I Circle+0 a few times when I was using windowmaker and selecting “exit session” caused the system to hang (separate issue). I am not sure whether or not the machine was plugged in when I did Circle+0 either.

I am back from a trip and will remove/re-add the batteries (this fixes it for me) and then see what happens again.

Exiting WindowMaker… then hitting Circle-0.
How about exiting your WM, then [fully] shutting down the OS, then doing Circle-0?

Do You still have the same problems?

No. I could just turn it off as usual (with OS poweroff) and then try to play with circle menu: turning on again, turning off, checking battery, and then at some point it will definitely stuck while trying to turn on, in most cases display starts to blink or just freezes with static image.

Demo (sorry for the music, forgot to turn it off):

Currently my Reform always without back panel, because I am tired to unscrew and screw it everytime

Well, it seems like if I am not trying to reproduce it intentionally, it works okay in most cases. But if I am trying to turn it off and on and so on it occasionally freezes.

After working well for some time, I caught another, seems to be related, problem. I power it off using circle button, it lay there for 1 or 2 days, when tried to turn it on, but nothing happened, OLED display was off. I unscrewed it, pulled batteries out and everything started to work again.

I guess in that state LPC wasn’t off.

This morning I had similar issue. I left laptop powered off overnight (as I screwed arch linux partition so needed to recover boot sequence). In the morning OLED was not reacting to circle button.
Edit: to avoid additional questions - rather keyboard was not reacting, I’ve tried to hold circle for 5, 10, 20, 30, 60, 90 seconds - nothing. I tried holding it for 10sec and then blindly pushing 1, 0, space, whatever - zero reaction.

Since it clearly looks like keyboard issue I lifted the keyboard bezel, measured VCC - SYSCTL had 3.3V and USB had none - as expected. Unfortunately RST button was too tempting to push, I couldn’t resist and pushed it. Obviously it recovered and i booted without issue. After reset OLED was showing 100% charge with 3.3V on each cell.
bottomline - it’s clear this is some kind of software lockup in the keyboard firmware, next time need to try some more detailed t-shooting.

My lookups have been similar. Hopefully one of the intrepid here will make some progress on figuring it out.

I thank all of you, especially ruff for your efforts thus far.

I had managed to get the Reform working a couple of weeks ago by once again disconnecting all the batteries and the power supply, then reconnecting them and rebooting. I discovered then that one of my batteries was completely discharged.

I decided to just leave it off and plugged in for a while. Today, after maybe a couple of weeks (of being plugged in), I decided to turn it on again. Here is what the battery monitor reported: 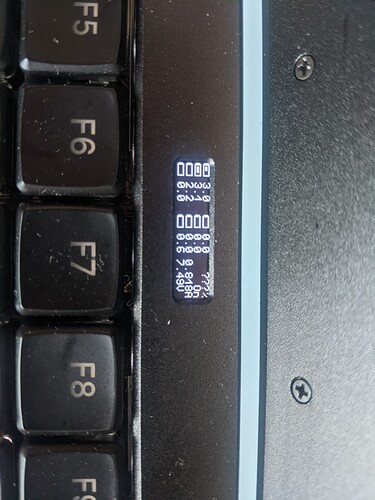 After about 5 minutes of use (on battery power), the Reform suddenly switched off, rebooted on its own, began to start up, then switched off and rebooted again. This cycle continued on its own over and over until I used the OLED menu to power off completely (Circle-0). Here is a video.

First, I’m sorry to hear about your situation.

Do I understand correctly that you left one discharged battery cell in the system and continued to use it on wall power? That’s not advisable. If you have a dead cell, you should remove all cells and replace the dead cell. I guess it’s too late now and you need to replace more of the cells. Do not run a system with broken cells in it.

Do I understand correctly that you left one discharged battery cell in the system and continued to use it on wall power?

Yes. Well, sort of. I wasn’t “using” it per se, but it was plugged in with the power off. I was hoping to bring the battery back to life.

I’ll get on ordering some replacement batteries.

I know mntmn recommended replacing the cells, but if you are familiar with batteries, have a multimeter, and a resistor you could try what I did. Because LiFePO4 cells are more resilient than others I didn’t feel bad about reviving mine once I left my reform unplugged and had some 0.0V cells.

In short (no pun intended), you would (edit: first remove the batteries!) connect a good cell in parallel to a bad cell with a 100 ohm resistor. This would charge the bad cell high enough to be read by the charging circuit in the Reform, and the resistor is current limiting for safety. Ideally you would have a dedicated LiFePO4 charger.

If you do buy new batteries (I did just in case) be sure not to confuse Li-ion with LiFePO4, you should get exactly the same JGNE cells the Reform came with, there’s none better.

Thanks! It’s all a bit above my level. I was able to locate some affordable batteries that would ship to the US here. 10 batteries for $20 seems more than fair!

I bought these FYI.