Re-imaged with latest system-image (presumably v3) from build (#793) · Jobs · Reform / reform-system-image · GitLab and still getting some of the glitches.

This was under sway clipped from a video:

Are these glitches expected? Is it possible there was some damage or connector which is seated poorly? Suggestions on what to take a look for?

More context:
Bringing up my DIY (Assembly Required) Reform 2 up for the first time. This includes the option for the NVMe and wireless card from CS. I noticed the occasional “color burst” glitch on the terminal during boot and some while in use. Seemed more often in graphical environment (sway). I am not sure which version was included on the included SD card, but I performed an apt upgrade which took a while and then the system failed to boot with a kernel panic.

I found references to “GPU glitching” with various scenarios, but not “general” glitches.

GPU glitches/freezes can occasionally happen (due to a mesa/new kernel issue).

Hi @josch I do have an Issue with v3 with screen flickering in Xwayland.

That does seem like a different issue than the flicker I get. But i’ve added some videos to my report so you can compare to be sure.

Hi I’m creating this thread to separate out the flicker issues I’m having from the rest of the v3 conversation. You can see the original post here: And a response from @josch with a similar flicker issue and asking if I think the mouse is entering text into the terminal: I’ll respond to that here. Firstly I think the issue in your video is the same thing, I image there are two back buffers, one completely black, and the other with the grey background set. When you move the mouse it does a d…

Latest glitching is much worse when they happen. Here is a video: https://ipfs.io/ipfs/QmVE9MmsanD9AZwb5zB9k66LCtNsDNRsUt4nH9ESo1CMK1?filename=20220608reformscreenglitch.mp4

I positively correlated the glitches with wireless activity. After removing the wifi card and antenna, I now only get the (expected) GPU glitches on startup.

I was able to prevent further glitches from the wifi after re-installing the wifi with the antenna located between the trackball and the battery.

My hypothesis is the small non shielded breakout portion of the display connector is susceptible to noise from the wifi antenna. It is possible the arrangement of the wires is contributing (i.e. right angles on the differential pairs).

I am attempting to modify the title to indicate my hypothesis, but can’t figure out how to modify titles. I am guessing it is an “earned” reputation feature or reserved for moderators.

I can change the thread title if you want.

Also, the video you linked gives me a 504 gateway timeout error. Perhaps repost? I’m curious to see what these glitches look like.

I can change the thread title if you want.

@bnys title update would be great to indicate wifi activity was causing the issue. It seems highly likely that this behavior is caused by the wifi activity on the antenna so close to the connector from my use of it today with nothing but small pixel noise on very dark screens (vs full blanking).

Also, the video you linked gives me a 504 gateway timeout error. Perhaps repost? I’m curious to see what these glitches look like.

I updated my IPFS instance to v0.13.0 and the video seems to be available now.

Changed thread title. Have you tried shielding the display connector with kapton tape or a small piece of foil perhaps?

EDIT: I just watched the video. This is truly strange! I have two Reforms with the stock wi-fi card and neither behave like this. My personal model is even upgraded with a Laird antenna and does not do this. I wonder if there’s a fault in the display cable or if it isn’t properly seated.

I also sometimes get wifi-correlated GPU/screen glitches. I’ve been travelling a lot with the reform, and I’m beginning to think there might be location/wifi-specific circumstances at play. On one specific network I used for a couple weeks, the glitching was consistent and almost unbearable. While heavy web sites loaded- the screen would jitter/shake a lot. Now I’m home and back on my home wifi, and there’s no glitching at all. I didn’t make any software changes that I know of in between.

I can see the glitching with the latest v3 sysimage. I’ve attached a video:

There’s vertical stripes at the top and a sparkle over the screen. If you look very hard in the black area you can see it.

It goes away if i run apt upgrade (actually before upgrade even finishes).

I wonder if there’s a fault in the display cable or if it isn’t properly seated.

I did attempt re-seating the connector, but it did not have any effect. Note: the connector requires a good amount of wiggle because the connector is tight (which is good!). It is possible there is something about the display signal path which is “marginal”, but the case came assembled with the screen in it (and I haven’t disassembled it). There were some tiny blemishes on the screen which made me think it may be sourced from a “secondary” market due to supply chain issues (which I am totally fine with).

Have you tried shielding the display connector with kapton tape or a small piece of foil perhaps?

I do not suspect kapton tape will do much other than possibly holding the broken out wires in a “better” arrangement, but I do have some shielding tape left over from the Hackaday Remoticon “Basics Of RF Emissions Debugging Workshop” which I may try next week.

I’m beginning to think there might be location/wifi-specific circumstances at play. On one specific network I used for a couple weeks, the glitching was consistent

This may make sense as I believe there are scenarios where 802.11 infrastructure (e.g. Access Point) “informs” the client which power level to use (so they don’t use higher power than required). This is usually called (Dynamic) Transmit Power Control. Not sure if our cards/drivers support it though.

It could also be differences in the transmit power allowed based on the channel number and width. There can be drastic differences in maximum transmit power allowed depending on the (FCC) rules at the time of hardware/software. For some equipment I have, the range is very extreme (between 10dBm and 23dBm) depending on: channel, width, VHT, beamforming, and STBC settings

actually before upgrade even finishes

I did try downloading a new package later to see if i could repro, I didn’t see any glitching but it was a pretty small package. I had not seen any more glitching after that, and no glitching on v2 at all. So maybe what I saw was different to what you have if it’s ongoing.

sysimage-v2 seems to have less reliable wifi than sysimage-v3, so maybe v3 is using a higher transmit power and that’s why I don’t have any glitching on v2, but that is me guessing.

Just did some tests at home, visiting speedtest.net and saturating wifi from different spots in the apartment.

At my desk, ideal signal strength: no screen glitches
One room away from the router, less signal: glitches slightly on downlink, glitches painfully on uplink

I also didn’t notice this kind of glitching until sysimagev3 (had another kind of glitch before but less often and not wifi correlated). I’ve also noticed more reliable signal strength using v3. Perhaps the regulatory zone is set differently?

So, I might do some experimentation with cables… In general, I’ve been making do but not happy with the antenna that came with the Reform. Will order that Laird part today and save playing with cables until installing it.

I wonder if there’s some easy/hacky way to shield the display cable.

I wonder if there’s some easy/hacky way to shield the display cable.

Have you tried shielding the display connector with kapton tape or a small piece of foil perhaps?

The shielding solved the issue for me! I used some 10mm EMI shielding tape wrapped up to the hinge and connected it to the HDMI shield (which appears to be attached to “ground” but is oddly not low resistance to the USB port shield). 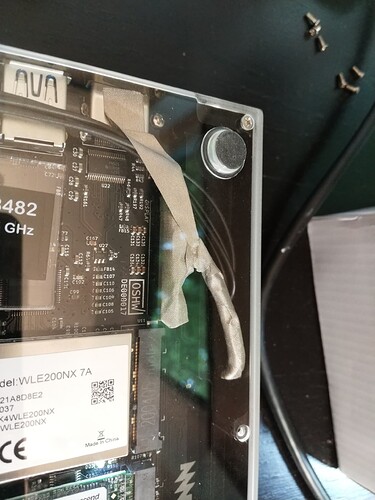 I’d like to attempt the same! I don’t have any EMI shielding tape… Anything you’d recommend I look for? Everything I quickly see is copper, but what you’ve used isn’t? And I guess it’s conductive so one has to be pretty careful about how it’s laid out? Any tips?

what you’ve used isn’t? And I guess it’s conductive so one has to be pretty careful about how it’s laid out? Any tips?

Correct, it is “braided” EMI tape. I purchased 10mm tape from here, but I can also send you some (inside US) if you like. DM me with an address.

You are correct that the tape is conductive. I was not concerned about the wrap on the cable touching anything, but the “tail” which grounds it to the HDMI shield could conceivably short something out. I routed one of the keyboard cables under it (pictured), to ensure it is held off the PCB.

Thinking about ordering this:
https://www.mouser.de/ProductDetail/3M-Electronic-Specialty/CN3190-10.3X10?qs=RnLyf%2BIy6kFv4uCI4iGMfw%3D%3D

I believe it’s the same material, only I’d have to cut the sheet into strips.

Should only cost me a bit more for 1oz first class envelope to Germany, so I can send you some.