Now you have me worried, I think this might be related to my trackball mod pushing the ball slightly too high as now I’m seeing it too. Do you have one the newest reforms that has the ball bearings in the trackball?

EDIT: Just tested my own here, I wet the center of a microfibre cloth with some screen cleaning fluid and put that right over the trackball. Closing down the lid showed the liquid transferred to the screen. So at very least the ball is very close, and given there’s some vertical play this could be related.

I’m going to revert back to the old stock trackball and see if this persists. I thought though I kept the height the same.

Do you have one the newest reforms that has the ball bearings in the trackball?

I don’t know about OP, but I’m running the original trackball - without the ball-bearings. I got the pre-assembled Max, too, so it’s factory-standard - no chance I messed up installation!

I also have the Reform Max with the original trackball, without the ball bearings.

still waiting on my reform, but with other laptops i usually insert a thin piece of foam between the keyboard and screen when carrying in a backpack – just like what ships with many units from the manfacturer.

Yeah, I also see a small wear mark on my screen where the trackball is. Using the ball bearing mod with 1.5mm bearings, FWIW. Not noticeable unless I’m really looking for it, under the right light and at the right angle. Less noticeable than the usual crap that tends to accumulate on my screens, but it’s definitely there.

I’ve also noticed that the trackball housing screws seem to be pressing against the acrylic a bit, but that may be due to my having replaced one of the stock screws (which I stripped while installing the bearing mod) with one I had on hand.

I wonder if mounting the sensor board at an angle to the cup (i.e., moving the cutout maybe 30 to 45 degrees off of center) might not allow the trackball to sit a millimeter lower while also yielding a bit more clearance under the cup to better facilitate screws with thicker heads?

I can confirm that I see a tiny spot on my personal laptop that probably results from contact of the ball with the display in certain situations. I had not noticed it before. We will improve this in future revisions of the components. 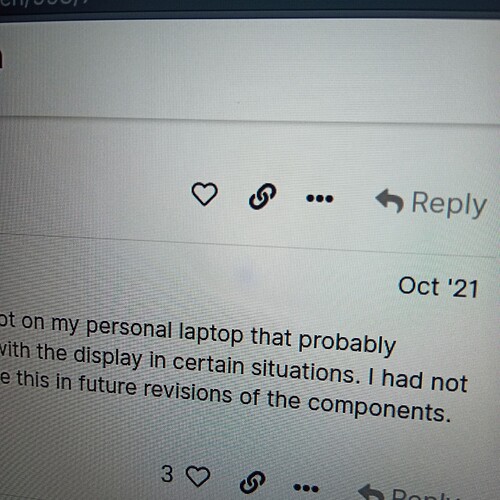 pressure mark on my screen is visible above and between the words “laptop” and “that.” took about ten days to form. this is aligned precisely with where the trackball sits when the lid is closed.

I’ve got a bruise on my screen now too… but it’s not where the trackball is. It’s to the right-hand side. No idea what’s caused it, as the thing rarely leaves my desk - so there’s zero chance it’s been bounced around in a bag and hit something, because it never goes in a bag. 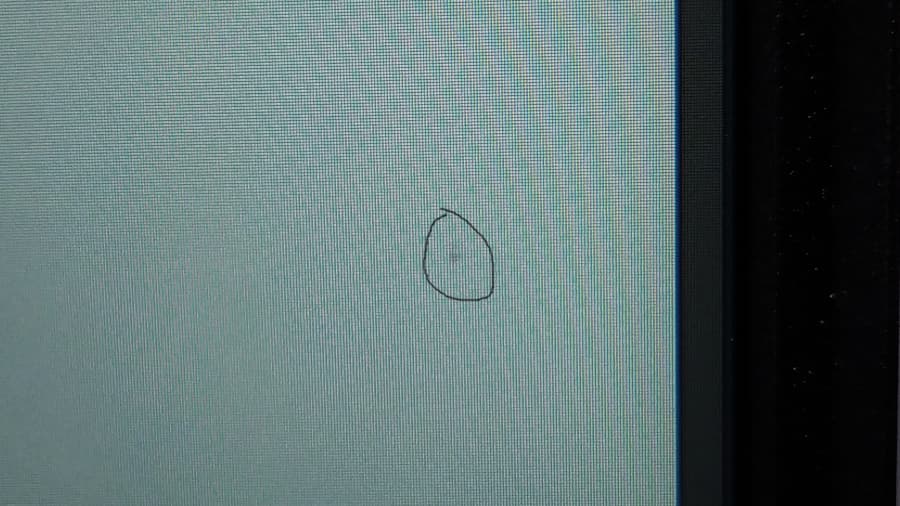 The mark from the trackball is also a lot more visible now - the splodge just above the cursor: 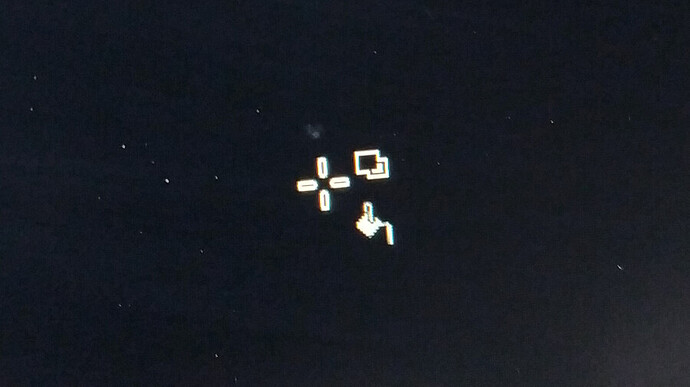 Just to rule out user error: my daily-driver laptop is from… 2016, I think, and has been all over the world with me - and has no bruises to the screen at all.

Ok you have convinced me to add small sticky felt bumpers 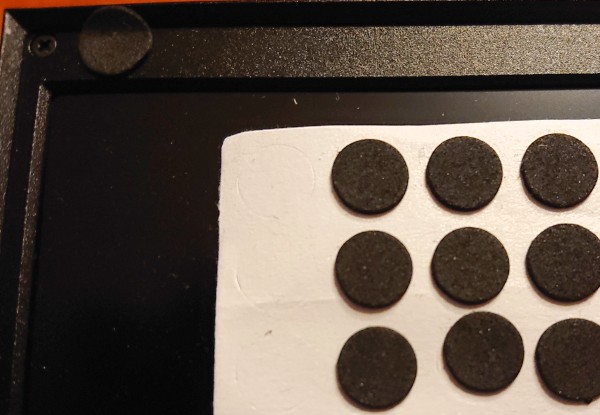 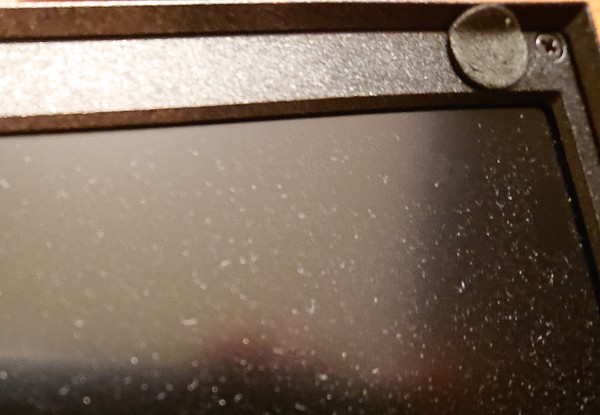 Oh I love the way it sounds when the lid closes. You know for sure that it is closed. I love how the screen wraps around the bottom portion of the case as well. In this way the screen is sort of holding itself in place from verticals pressures that can happen while transporting it.

Seems very well thought out to me.

I would also just like to add that I do not have any such bump or blemish developing where the trackball on mine sits. Just for what it is worth. My Reform is barely a month old though at this point.

well I also like how it clicks when I close it but my wife shudders when I do it at midnight.

Are you using yours as your primary computing device?

Yes, mostly except when I need to pick at its insides or (re)build an image (like right now when I’m trying to build L5 kernel with reform-system-image)

Do you already have your L5?

No, but estimated shipment is this quarter, so maybe on fool’s day

i carry mine around in a 37l backback filled with other heavy stuff, which i assume ended up putting enough pressure on the lid to push it into the trackball. it turns out my earlier suggestion of placing a thin piece of foam between the keyboard and screen was impractical owing to the very snug fit of the lid when closed. in this case, i’m not even sure the suggestion would have worked.

Based on my own observations, the trackball does not touch the screen. However if you were to invert the laptop and put varying pressure on the lid you might enable the trackball and screen touching. Still unless this was very pronounced, ie: you shouldn’t be doing whatever you were doing, then I don’t really see how this could damage the screen, other than transferring the oils from your fingers on the trackball to the screen.

my mark doesn’t seem to clean off, but i’m also not fully convinved it’s a “pressure mark” (damage to the lcd) versus another kind of mark (finger oils, or whatever). i’m a little reluctant to clean too vigorously, as i don’t want to actually damage the lcd. however, it is likely the pressure inside my backpack with all my other stuff was enough to render a real pressure mark. i knew this was a possibility, but it is what it is. the reason i use a laptop is because i need portability.

How old is your Reform? The trackball design was modified in later builds to lower the height and fix the problem, to the best of my knowledge, so unless you have one from the original run you won’t see the problem.

I can tell you that on mine, from the first batch, it’s definitely not a user error: mine has never spent any time inverted, beyond when I was first assembling it, and has never been in a backpack.

my reform was received at the end of december, 2021.