Does anyone know if there’s a guide on how to install Arch Linux Arm on MNT? I found one for gentoo but nothing on Arch.

I was about to crate one but still didn’t have time, will do over the weekend.

I would be interested in any advantages that moving to Arch would provide? I get that it is bleeding edge, etc. Just curious if moving to Arch has everything working?

I use Arch on MNT Reform, everything works as should. I just ported reform-tools and some tweaks from system image.

Debian sid perhaps is even more bleeding than alarm, it’s really just a matter of personal preference, there’s no real benefit. It just to me arch looks more logically organised, I understand its concept. While debian to me is a tad illogical, sid too chaotic, anything non-sid is too slow, dependencies are a bit odd… Arch is just a distro with no strings attached, it does not carry any legacy like “we do it because we have always been doing that”. Don’t know, it’s mental

All sounds like things I could get behind. Of course I am a big fan of Ubuntu LTS so maybe all that really means for me, I don’t really mind either way. I just want things to be stable, and if I need something that is newer I can get it, without breaking my system.

Distro differences aside- you’re going to put more work into Arch at this point than you would with Debian simply because of community momentum/MNT support.

But the work you put into using Arch is personally beneficial in a different way. Arch is a great distro for learning things across the Linux platform. If you want a taste before diving in, I’d highly recommend taking up the habit of using the Arch wiki as a first-step point of research when trying to set anything up. I use Debian, but have used the Arch wiki extensively for setting things up on my Reform. For example, check out their documentation on hardware/video acceleration, DPI scaling, or LUKS encryption. These sections of their wiki alone are better than any other source that I’ve found:

Another nice thing about Arch is the package management. It’s not a matter of better-or-worse, it’s just simpler and easier to build one-offs than with Debian. i.e., you’re more likely to benefit from learning how to build Arch packages even if you aren’t going to become a maintainer.

For me it’s just that Arch is more familiar; I run it on every machine except two Raspberry Pis. I know where to look if things break and I have a few custom things packaged as AUR. Although I’m slowly migrating the AURs to guix.

will do over the weekend.

Here made a quick one, tell me if I need to cover something with more details.

I also did AUR package with reform-tools and 2 systemd services (need to be enabled). Also you need to edit /etc/systemd/sleep.conf file.

@mntmn and other reform-tools maintainers! Would be nice to make dedicated repo for reform-tools with more distro and environment agnostic approach.

I don’ t know. I think with the limited bandwidth that MNT can muster, sticking to one distro and one distro only makes the most sense. I think going with Debian made a lot of sense.

There are parts of Arch that are awesome, but I have to admit that Debian seems like a more complete system for most.

However, if someone external to MNT wants to make an Arch distro possible and easy for all who want to use it, I would be super down for that. (Which is to say that would awesome, and I would certainly try it out.)

For me personally, I just want my suspend to work a bit better and get Steam working.

Has anyone tried Void ARM?

An individual (sigrid) on the IRC channel does and even posted a video about how fast his boots.

sigrid has made an sdcard image available here: 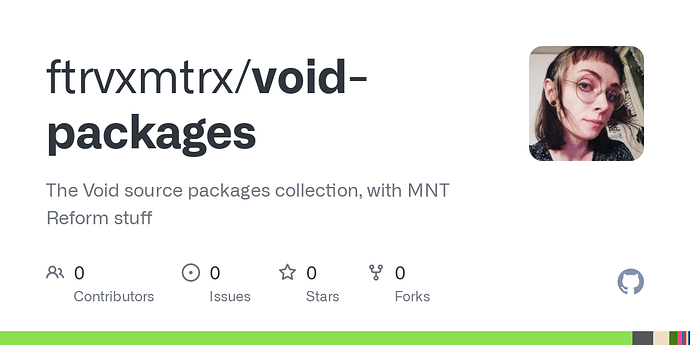 Has anyone had success with this Void image? I was unable to get it to boot. Tried flashing with dd, raspi imager, and balena etcher.

i have not had a chance to play with it beyond simply booting to a root prompt. an earlier version did work for me; but the last one i tried (from a few days ago) crashed during boot. (sorry for the blurry image.) 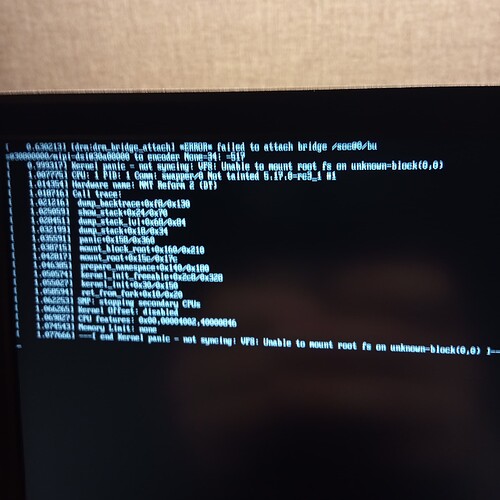 From the error message it looks like the image has hardcoded /dev/sda1 as a root partition (maybe in fstab) so the init tries to switch root to nonexisting block device.

@josch so does new V3 image support kernel update? I want to port this functionality to Arch Linux if it does.