TLDR: We found a way to make charging/battery balancing better on the MNT Reform production motherboard R-2 with a small hardware modification. In addition, there is an LPC firmware update and a keyboard firmware update adressing some charging related bugs. If you desire the hardware modification, we offer it as a free service (except for the cost of shipping the board to us). If you haven’t received your MNT Reform yet, regard this post as purely informational – the update will already be included in your device.

In the last days I have been investigating a problem that has appeared while testing motherboards for fulfilling further crowdfunding orders. A percentage of boards (none of which we shipped!) seemed to have an unstable power supply and would go into a reboot loop (brownout) as soon as the display backlight was powered.

I have been in touch with several other engineers and we thought the issue was due to component manufacturing tolerance spread in the passives around LTC4020. After thorough investigation I concluded that the LTC4020 RNG/SS (charge current limiting) pin operation is unreliable. The charge balancing program running in the motherboard’s LPC uses this signal via a MOSFET to limit charge current to almost zero while balancing (= “burning off” charge of an overvolted cell through a bypass resistor). But using this pin also, on some boards, interferes with the DC/DC function of LTC4020 that supplies system power. This is not evident if charged batteries are in the system – but very much so when there are no batteries connected.

On Saturday I found a reliable workaround that turns out to be a better solution than the original design, as it also has the following benefits:

The solution is to disconnect the RNG/SS pin and let it float, and to reroute the current limiting signal to the NTC pin instead. Shorting NTC to GND is a reliable way of turning off the charge current completely and much more cleanly than through RNG/SS. With this modification, all boards run 100% stable. 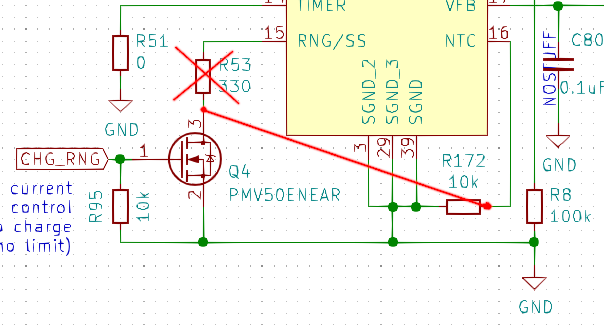 Luckily, the required modification is simple because resistors R53 and R172 happen to be directly next to each other! 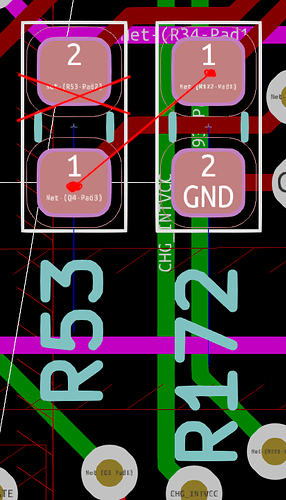 The modification is performed as follows: 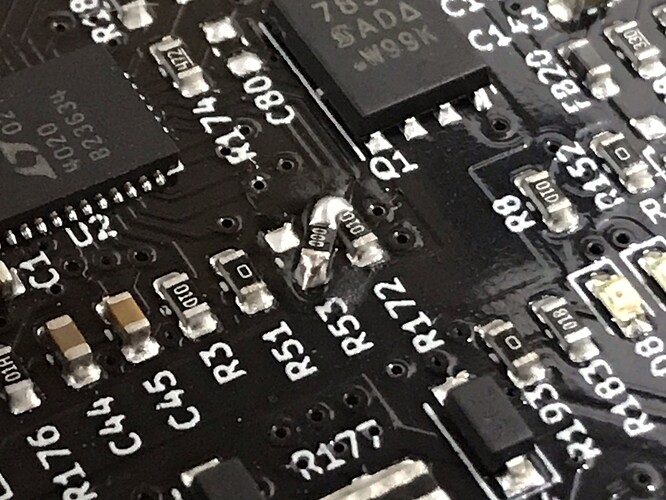 Complementing the modification is an update to the LPC firmware. This tweaks the voltage thresholds used during charging and balancing to work better with the modified charger. I also found and fixed a bug in the battery percentage calculation – in case you were wondering why the percentage goes from 100% immediately to 75%, this is the answer.

To update the LPC firmware, please clone/pull the latest master branch of the main MNT Reform repository and follow the instructions in the handbook.

Important: If you did the resistor modification, set the revision in line 40 of src/boards/reform2/board_reform2.c as follows:

If you have an unmodified R-2 board, set it to:

I also found a bug in the keyboard firmware causing the “low battery” symbol to blink even if the charge level was unknown (battery status displaying ???%). This was an off-by-one error when interpreting the battery gauge string from the LPC. Please refer to the handbook for the update procedure.

If you are one of the first 25 people who already got the MNT Reform from the crowdfunding campaign (unit shipped before 2021-04-19) and (understandably) don’t have the soldering skills to modify your motherboard or don’t want to mess with it, we will do it for you and also update the LPC firmware in the process. This service is free of charge, we only ask you to cover the shipping cost of sending us the motherboard. We’ll cover shipping it back to you. If you want to make use of this service, please contact me at lukas@mntre.com.