Battery is not charging

I just assembled my DIY MNT reform kit. I am afraid my batteries aren’t working correctly. Right from the beginning the battery symbol in the top right column of the OLED blinked. It stopped after I completely charged the device. Now after all cells are empty the top right battery blinks again and the OLED shows wired values, e.g. 5.3 V for some cells. After more than 4 hours of charging the total voltage increased from 3.3 V to 3.5 V but the total current is still zero A and the percentage is ???%. I swap the batteries from the left to the right battery holder but the OLED still shows the same blinking cell in the top right column. 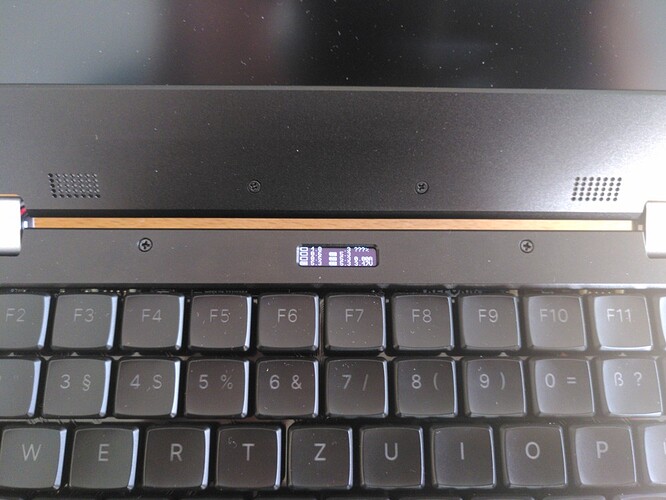 After disconnecting the power supply the MNT reform doesn’t boot nor the OLED is awake (as expected with this low voltage/current).
Does anyone has an idea what I did wrong. Or is one of the/are multiple batteries damaged?

Sounds like some batteries are damaged or just discharged too low. The blinking batterie is something many (myself included) have seen and should vanish after some time.
These batteries discharge kinda quick and you cannot bring the charge back just by plugging in the charger. You might need to buy a few new batteries(luckily they are not very expensive).
This discharge should not happen, when the batteries are just “lying around”.
The Operators handbook gives some information about the handling and types of batteries you can use. It can be found on-line if you didn’t buy a copy.
I hope this answer is of help to you

@morl0ck thanks for your answer. After reading the operators handbook I must admit that I left the MNT Reform on battery until it died (and let it without power supply for many days). So I guess my batteries are deeply discharged.
I just ordered a set of new batteries.

Sorry for your trouble. In some cases, LiFePO4 batteries can be brought back to life by charging them outside of Reform in a 18650 charger that supports LiFePO4 (for example NightCore), or a current limited power supply (like a cheap lab power supply) set to a low voltage like 2V.

PS: Make sure to buy LiFePO4 batteries only, not LiIons.

I also left the reform unattended for 5 days and have the same behavior. The batteries are not charging anymore. I would try to revive them by charging them outside the Reform, but is there a way to disconnect the battery pack without having to open up the bottom plate every time ? Has someone come up with a better DIY solution ?

Thank you for this hint! I wouldn’t have otherwise tried to recover with my lab power supply and bought new batteries.

I had left the batteries in the device for a few days (<2 weeks) and some cells were down to below 1V.

I couldn’t find spec sheets for the delivered batteries, but current values around a tenth of the cell’s capacity should be OK (i.e. 180mA for 1800mAh batteries) based on my later reading.

The other two cells showed voltages below 2V, so I charged them again at 2V and 0.1A and waited until the current showed <15mA, that recovered all cells.

After immediate disconnect of everything and initial panic, I found one resistor which is charred (R28). Surprisingly enough it still measures the same resistance values as the other resistors of the same type. I suspected that’s a sense resistor, but after looking at the schematics I’m not sure what it’s for.

I let it charge for a short while and cell voltages looked good, but I won’t use the reform with batteries until I sourced a new resistor and replaced it.

This is a bit alarming, I must say. What is the recommended way to keep the batteries from ceasing to take charge? Will I need to take the batteries out when I’m not using the device? How long until the batteries fully discharge?

I think one or two weeks, but I don’t have conclusive data yet as I use my Reform pretty much every day.

Thanks for the idea of bringing the batteries back outside the Reform.
My batteries were down to 0.3 ~ 0.6V and I used my lab power supply.

Interestingly when limiting the voltage to 3.2V and the current to 500mA the resulting voltage when connecting the batteries ramped up to 2V within a few (5-7) seconds.

I loaded them to get 2.8V which lasted about 40-60 seconds.
After ‘kicking’ all eight batteries this way they were at least at 2.6V when putting them back into the Reform which made the charging circuit accepting the batteries and properly charge them to the end.

One day after this action the batteries are still at 100% - so I wanted to share my experience at least.

In my test I can confirm one and a half to two weeks of lying around until you have to recharge.
Anything longer and you have to bring the batteries back from deep discharge

Yes, this fits to my calculations. In the meantime I have made some tests: if we introduce deep sleep functionality in the LPC and/or in the keyboard MCU, this time can be prolonged significantly.

Can anyone recommend a good charger that you can buy in Canada/North America? Need one to bring back my discharged batteries. I checked on amazon.ca and there are a bunch, but I’m not sure what to get. I didn’t see any NightCore that @mntmn recommended, I did see a few Nitecore, is NightCore a typo? I don’t want to buy something that will catch fire when I use it.

I’m not sure exactly what happened with my laptop. I haven’t booted the laptop all week. But I’ve been monitoring the battery status from time to time using O+b (great feature btw). Last time I checked was either Thursday (two days ago) or Wednesday (three days ago), hard to tell given that everyday looks the same. In either case it said it was around 40%. I know it was around 43% the day before I checked that time. I did not check it yesterday.

Today it was completely dead. Plugged in the power brick and I see a similar battery status as @sgibb. Three batteries have 0.0V, two around 0.2V and the rest around 1.1-1.8V. And the top right battery icon is blinking.

Only thing I can think of that caused this is that I might have missed to turn the battery status off after checking. But will that drain 40% of the battery in 1-2 days?

Edit: Hmm, just when I finished typing this and checked the battery status and now all my batteries are around 3.3-3.5V, still ???% but it looks like it’s still charging (-1.41A). Unplugging the power brick and laptop still works. So I guess false alarm.

I’ve been happy with the Tenergy T4S (https://www.tenergy.com/01432). Make sure to set the switch to LiFePO4. Pretty sure I got mine on Amazon in the US, but it’s been years.

Sadly it looks like that one only exist in the US. I found it on amazon.com but not amazon.ca (or anywhere else in Canada).

But it seems my laptop bounced back, I left it charging for about an hour after I sent my last message and now it says 100% charged! So for now I don’t need to find a LiFePO4 charger.

Anyway, thanks for the recommendation. At least now I know of one good brand for chargers.

I got this one here in the US on Lukas’ recommendation:

Nitecore New i2 Charger worked great for bringing low voltage batteries back to life. Batteries were automatically detected, and I put each one on the charger for ~30 mins to resuscitate, and put back into Reform to charge the rest of the way. 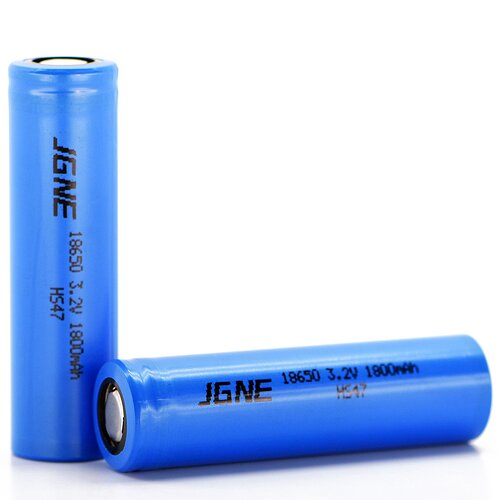 The JGNE 3.2V 18650 1800mAh 5.4A LiFePO4 Battery is currently in stock and available at 18650 battery store. Bulk discounts are available. All items ship from our Atlanta, GA warehouse for quick delivery within the USA. Grade A, matching voltage,...

It sounds like future firmware updates will eliminate the discharge issue by stepping into a lower power mode so hopefully we won’t have to worry about this much longer.

Well I won’t say eliminate the issue, but instead greatly mitigate it. The standby draw will be tiny, but if you left it maybe a year you still could get them low. Ideally would be to have a low voltage battery cutout IC, so the only draw is then is the cells self discharge.

I’m having a flashing battery symbol issue on my first day with the reform as well. The battery percentage has always read as ??? but after using it for a few minutes in sway it starts the battery flash. I don’t know much about charging these kind of batteries. I’m also wondering about what kinds of chargers can be used with reform. I remember reading on the crowd supply page that they wanted to make it so that it could accept a wide range of voltages. Can it charge on say 12v at less than 1 amp?

EDIT: I also just noticed the advice about removing the batteries if you will not be using the reform for a few days…surely there must be a better solution than removing the bottom panel everytime? Is it a bad idea to clip the battery cables and run them through a physical switch that can be mounted on the exterior of the case somewhere? I’m thinking it would only need to be the negative from both packs that goes though the switch; but like I said, I don’t know much about charging, electronics/circuts in general. I will certainly often not use my reform for days at a time, and can’t be opening it every time…

If you’re seeing ???'s on your first day, you need to leave it plugged in to charge. The battery needs to charge up to 100% before it’s able to estimate the remaining capacity. The symbol starts flashing at ~10% remaining capacity, but I believe will show up if some of the cells are low.

Keep in mind that the battery status won’t currently update on it’s own, you have to press CIRCLE+b again for it to update. You’ll know you’re at 100% because the current will go to 0.00A, while you’re charging you’ll see something like -1.37A, and when running off batteries it’ll be around -0.30A

As this is a related topic, Keyboard/LPC Powersave firmware is now in the git repository: Battery monitoring while "off" - #5 by mntmn

Want to add a report of my own experience. I must have put the Reform into suspend mode using the provided script (I do not have any of the new firmware) and left it lying around. I had to travel for a couple of days and when I arrived I noticed that it would no longer take a charge. I am able to use when plugged in, which I’m doing as we speak.

Here is what the oled indicator reports about the batteries:

Does this mean I should just go ahead and order new batteries?