Battery is not charging

It does not charge on my end with the same display as OP after not using it for a while, but on barrel plug. system status shows cell missing: I assume one is defect, does it tell me, which cell is missing?

Is there a good resource for spare batteries in Europe?

FWIW, maybe this is worth a shot before purchasing new batteries:

I also had issues with the batteries not taking a charge. I also picked up a Nitecore i2 charger. The LEDs would flash when attempting to charge the batteries, which indicates a battery fault; the charge was simply too low for it to activate the charging sequence.

Despite it not being the best practice to charge batteries that have “zero stated,” I placed several batteries in sequence and connected them to one slot in the charger. The voltage was still low, but it was now high enough to activate the charging sequence. I charged them by hand for a minute or two. This got the batteries to the point where they could be used normally in the Nitecore charger, and they later worked as expected in the Reform.

Does anyone know a good resource for spare batteries in Canada? The shipping is 45 USD from the Bulk battery link above for 2 batteries that cost 6.75 USD… Closest I’ve found was amazon, two pack for 13 USD but those where just 1200 mAh.

I get to join the club of people with dead batteries.

I was in a different place for a few weeks. Before I left I checked the voltage of the batteries and had the battery monitor show ~80% charge. Since I have the firmware updates installed and kept the device without charging for longer periods before (periodically checking charge), I felt safe leaving without disconnecting the battery cables.

That was a mistake. When i came back close to a month later, multiple batteries showed low voltages and one of them refuses to keep a charge now.

I couldn’t find the 1800mAh JGNE in stock anywhere. Mixing different batteries is not recommended, so I’ll have to buy a full new set. I can probably find some use for the 7 working JGNEs, but it’s still a waste which should be avoidable.

I looked at the schematic to see how difficult adding an external switch would be.

If I read things right, then disconnecting the fuse F2 will stop supplying the system with power. It should be possible to desolder F2, and replace it with the fuse + an externally accessible switch to cut power externally.

My understanding is that the BGATE pin of the LTC4020 controls the connection of the battery to the rest to the system. Unfortunately, the pin would need to be pulled high to disconnect the battery, so I can’t see any way for software to force a battery disconnect if any cell reaches the lower cutoff voltage.

There’s probably a way to change the circuit to create a software controllable “resettable fuse” (N-channel mosfet in series to the actual fuse?) which could be tripped when a low voltage threshold is reached and reset when the power supply is connected, but doing so would require the LPC to be powered or at least periodically woken up to check the cell voltages and trigger the fuse.

While I confess to not knowing anything about the LPC, this actually sounds feasible as an aftermarket modification. There seem to be unused pins on the LPC, so one of them could be used to trigger the battery cutoff.

I imagine the following steps would work:

A disadvantage would be slightly increased power consumption / added resistance due to the the new mosfet. Depending on the implementation, turning on the system would require external power (or maybe a push switch to bypass the mosfet?) after the battery pack was disconnected.

Could someone with an actual EE background check the feasibility of what I’m trying to describe here? Such a thing probably already exists; not having read details, e.g. AP91352 with undervoltage lockout sounds related.

I like your idea, and came up with this variation:

We build a new Battery PCB that includes a mosfet that is held high by the LPC. After the LPC drops power, no power will leave the batteries. A momentary push button switch pulls power from the batteries to charge a capacitor that re-activates the mosfet for long enough to have the LPC pull the pin high again. That switch can be exposed from the side or bottom of the laptop.

For extra credit, we could build a small PCB that plugs into the old battery boards to make them into a USB power bank. Many of us now have 4 spare cells, and that would make them useful.

I like the idea of a PCB which is connected to the mainboard and to the battery boards and allows disconnecting the battery. Saving one set of batteries might be enough to offset the cost.

Some notes: If I read the data sheet correctly, the LPC turns off pins in deep sleep mode. I imagine either an external pull-up (if pins are high-Z during sleep) or a latch could be used to keep a voltage level while still allowing control through a MCU pin to change state.

It also seems that switching is a bit more complicated. The LPC’s 3.3V is referenced to ground, both BAT1+ and BAT1FUSED are >25V in reference to ground. (Search term: high side switch)

Using an N-channel MOSFET would require an even higher voltage than the >25V at the MOSFET’s gate to turn it on. While this can be achieved, this would require additional circuitry to create a charge pump and, I suspect, not provide the most power or cost efficient solution.

P-channel MOSFETs need a lower voltage on the gate compared to the source terminal. While our MCU’s 3.3V are at a lower potential (25V-3.3V = -22.7V), the MCU pin would not appreciate being connected to 25V in any form. As I understand, connecting the gate to a transistor and switching the transistor with the MCU pin would achieve our goal, but I don’t know the most efficient solution here.

As a quick solution, the fuse F2 could be removed (desoldering the holder doesn’t look easy with only a soldering iron). A fuse (125V/4A) and a switch could be placed on top of the SD card slot (with some non-conductive material) and connected with cables to the F2 pads. To expose the switch to the user, a cut-out could be added to the side panel or the side panel removed. This would make disconnecting the battery easy without requiring removal of the bottom panel. 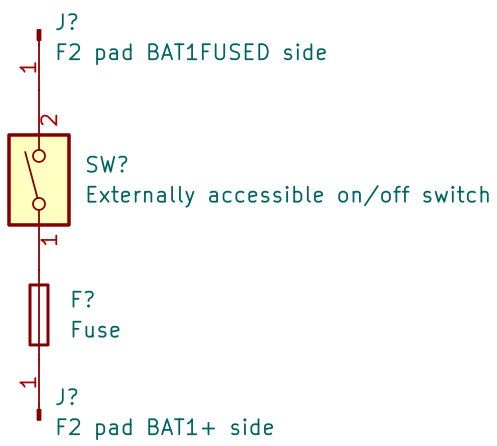