Hi, I arrive from a Thinkpad T420 where you can use the sim to navigate, I am very interested if it is possible to mount a system to use the 4g telephone sim (antennas and sim housing) it would be an interesting possibility.

I await information and opinions,
Thanks and sorry for my English 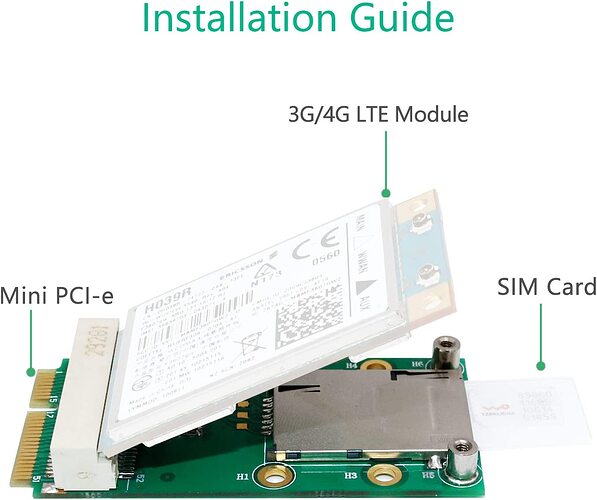 There is a mini PCI-E slot, though it’s used for the wifi adapter. Either you’d have to sacrifice that, or find a combination Wifi+Cellular modem that works with Linux, ideally with drivers in the mainline kernel. I’m really not sure if such a thing exists, but it seems plausible to me. I couldn’t tell you if it’d be easy to set up, or work reliably though.

If they don’t mind it would be possible to use a USB WiFi adapter since there are three USB 3 ports. That should allow WWAN and WiFi easily enough.

There is a mini PCI-E slot, though it’s used for the wifi adapter.

Even if you put a LTE Modem into the mini pcie slot, you will still be missing a place to put your SIM card. I have never seen a mini pcie modem with a SIM card holder on the card itself.

Even if you put a LTE Modem into the mini pcie slot, you will still be missing a place to put your SIM card. I have never seen a mini pcie modem with a SIM card holder on the card itself.

I have, and there’s also e-sim. Not sure you’d get a 4g/5g one in mini-pcie though, most of the ones ive seen are M.2 and actually use the usb lines on the M.2 connector, not the pcie.

I’m also interested in having 4G/5G with my Reform but I think what I would do is to get a USB modem (which of course already has a SIM card slot) remove the housing and then securely mount the board somewhere inside the reform. Does somebody have a recommendation for a USB LTE modem that works well with Linux?

I also have to redact part of my last post. Somehow I didn’t see the image in the very first post of @A1Giorgio at the top and I didn’t know that there are mini pcie adapter boards that come with a SIM Card slot. I didn’t know those existed.

@A1Giorgio what is the adapter card from your image called? What brand and model is it? Where can one buy one?

there would be the problem of the antennas … can’t use the wifi antennas right? if i wanted to keep wifi, i’d be to avoid usb sticks and look for an internal solution that keeps both solutions (wifi and 4g)

Thank you for the links!

A quick online search did not reveal any pcie cards that can do both wwan and wifi. I’d go for attaching a USB wwan stick internally (there should be enough free space inside the reform still) but another option might be to use a raspberry pi compute module with wifi in the future and use the wifi from the compute module and add a wwan card with such an adapter.

I searched around a bit more. It seems to be possible to split a single mini pcie connector into two with an appropriate splitter board like this: 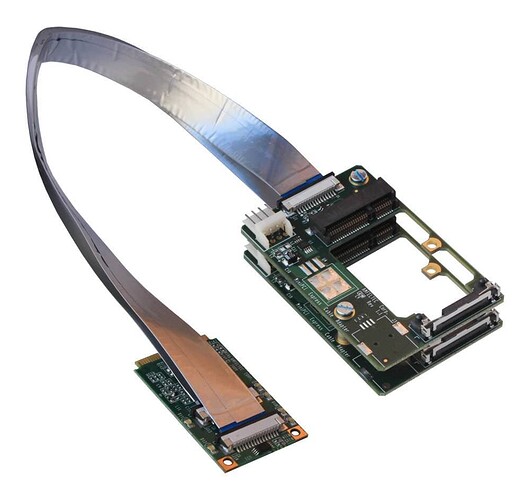 Unfortunately a bit too expensive for an experiment that I don’t know whether it will even work or not – and sold out everywhere I looked.

For attaching the SIM card to a mini pcie wwan modem in the reform I also found some sources that are not on amazon: Jetway ADMPESIMB (SIM-card-adapter f. Mini-PCIe 3G/4G/UMTS/LTE modems)  [ 3G / 4G / 5G / GPS ]

But this let me to find another ridiculously tiny solution to attaching the SIM card from the same store: SIM-card-adapter f. Mini-PCIe 3G/4G/UMTS/LTE modems  [ 3G / 4G / 5G / GPS ]

As far as I can see we don’t have a free internal USB port inside the reform case, so I’d need to install a hub. Luckily there exist ridiculously tiny USB hubs like this one, which could probably easily be used to split off another USB port from one of the internal ones that connect the keyboard for example: Muxtronics NanoHub

So I think the best way would be to attach either WiFi or WWAN via minipcie and the other via usb. Do people have a recommendation whether there are better WiFi USB adapters or WWAN USB adapters?

my experience is that usb wifi is universally terrible and most wwan is usb underneath anyway.

But is there space inside the laptop ?, for the antennas?

I’d also love to have a second mini pcie slot but I think this is a limitation of the SOM which only offers a single mini pcie, right @mntmn?

who knows if one day they will make a motherboard (to be upgraded) that will have more slots, it would not be bad.

I was looking for cards that have wifi and lte 4g combined, but they are very rare.

who knows if one day they will make a motherboard (to be upgraded) that will have more slots, it would not be bad.

On IRC, Lukas pointed out that there are chips called a pcie switch that would allow more than one pcie socket on the motherboard: https://eu.mouser.com/c/semiconductors/interface-ics/pci-interface-ic/?type=Switch%20-%20PCIe

I was looking for cards that have wifi and lte 4g combined, but they are very rare.

Did you find any? I found none.

I’m currently adding this USB hub into my reform:

After removing the housing, the board is only 32 times 21 mm, so it will comfortably fit into the Reform. I also got myself a Huawei E3372 USB LTE modem which, after removing its housing will also fit into the reform case. I’ll post more details once I’m done.

Great news that you can make the space.

It’s a valuable contribution.Thank you, a step by step guide to implement this feature would be fantastic! Some who come from the Thinkpad like to bring LTE to Mnt Reform!